This is a companion blog to my other site jdmtune.com.

The smart ones of you would have figured out why already. This blog will help keep track of repairs, modifications, ongoing issues etc of a couple of old porsches I've got as project cars. 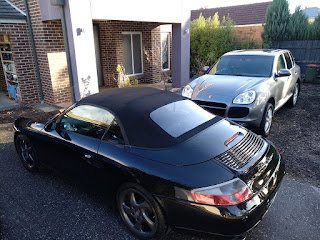 
The first one is the 911 carrera 2 cabriolet. Love the look of this car -black roof, black paint, black interior, and charcoal (almost black) wheels. This one I bought on impulse, and naturally being a 20 year old car it has issues. Has been sitting in my garage for the last month waiting on a crank position sensor to be delivered from UK - hoping to get this job done on the weekend coming.

The 996 model carrera is the most unloved of the 911 series - but given the crazy prices being commanded for all other 911s (look at the prices of 993s!) I figure that if I keep and drive this one for a year or two, I can move it on for the same price I paid for it - or maybe a little more!

The only downside of this particular car is that it's a Tiptronic - or auto as anyone sane would call it. A manual transmission would make this car 50% better - which is why this car cost 50% less than the next cheapest manual 911 996 at the time I bought it.


The other one is a cayenne turbo. This is the car that porsche purists love to hate, but it's the car that saved Porsche - fact! It's got a proper 331kw 4.5L V8 twin turbo and plenty of torque. This is my current daily driver. Fast, luxurious, comfortable, can fit anything in the back.

It took a while for me to get back into german cars, had a horrible experience owning an audi a4 - this one. 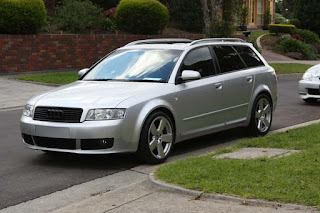 This was a 2004 audi A4 avant, s-line quattro I had many many years ago - it was only just out of warranty. It was nice to drive when it worked, which was something like 40% of the time I owned it. It was a reliable car, except for
so... typical VW/audi "reliability" right there. This one lasted 6 months before I threw it away, what a piece of crap.

aaaaaaand so now porsches, which will have dubious reliability too, except repair bills are potentially a lot more than the audi. Naturally 3 weeks after i bought the cayenne, it ended up on a flatbed towtruck because of broken coolant turbo Ts. Could've fixed it myself, except being the end of financial year I had no time to get into it.

Hopefully I can maintain and repair these P cars!

I have no mechanic training and no mechanical background, but I'm willing to give anything a crack - the worst case scenario is if I can't fix something, I'll get the car towed to a mechanic and get it fixed.