Anyway, this morning removed the airbox, belt and alternator (this time only took 15 minutes now I've done it a few times!). Unplugged the electrical connections from the alternator, and reinstalled everything.

Car runs fine, perfect idle, not a problem. This isolates the problem to the alternator/charging circuit, and everything else is good.

While the alternator was out, I rechecked the new Y cable (all connections appear good), checked all vacuum connections (again seem fine).

Next step? I'll probably remove the alternator and send it to an auto electrician for testing. Possible issue - alternator has some crazy internal fault that only shows up at idle? Voltage fluctuations, other things causing engine to run poorly. Hopefully a good auto elec will be able to bench test, simulate load etc. Then get alternator rebuilt, reinstall, and hope it works.

Was thinking of selling the 911 once all these issues are fixed - but I still like driving the car!

Thought I might try a few random experiments today - removed the airbox and serpentine belt (let it dangle underneath the car) and tried starting it up.

Guess what - engine runs perfectly with the belt disconnected!

And when I replaced the belt, back to stalling immediately and idling terribly.

All the pulleys and tensioners seem fine.

Tomorrow will remove the alternator electrical harness at the back, and see if the car runs OK with the serpentine belt on, but alternator disconnected. If so, then further investigate the alternator, the regulator, and all electrical connections from alternator.
- April 24, 2021 No comments:

Porsche 996 - continuing the saga of stalling and misfires. Replacing the fuel pump

Was psoting about these problems on FB, and Jake Raby thought it'd be worth changing out the fuel pump. Why not - pretty cheap part for $150 (non OEM) part. 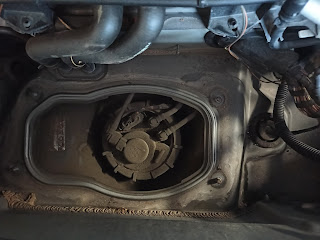 Remove the locking ring (I used a rubber mallet and wooden stake), lift off the top plate and disconnect the two fuel lines (press in the little black tab) and remove the electrical connections. 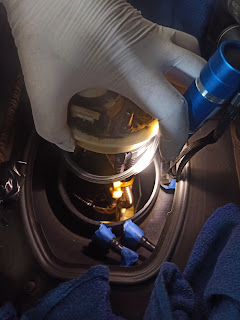 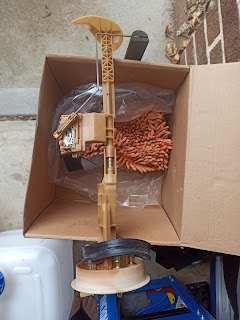 Removing the old fuel pump was a little tricky - in theory, just grab it and rotate counterclockwise. Mine was stuck fast, I wrapped an old belt around it and yanked it counterclockwise to loosen it. 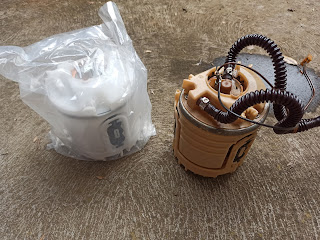 The new pump didn't come with any connecting pipes or connectors. I removed the swaged metal bands holding the original fuel lines in, and used new stainless fuel clips to lock them into place ont he new pump. 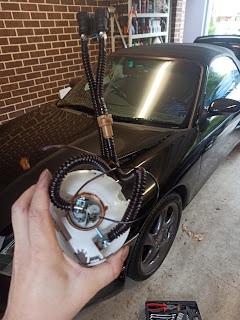 Reinstallation is pretty straightforward. Threw some fuel in and started the car up....
.... only a slight improvement. Car doesn't stall completely and die, revs hunt up and down, few pops from the left tailpipe.
More to come!